Title: Whaam!
Medium : Offset Lithograph (Diptych), in yellow, red, blue & black on Huntsman Supewrwhite Cartrdge, circa 1967, Printed to lower edge of each sheet 'Published by Tate Gallery, London”
Edition: 3000
Size: 64 x 74.5 cms (Each print)
Published by: The Tate Gallery, London, 1986
Printed by: Lautrec Photo Litho, Ltd., Leeds
nne) Number APP7, Page 293
Note: Whaam! 1963 is a large, two-canvas painting by the American pop artist Roy Lichtenstein that takes its composition from a comic book strip. This large piece, now in the collection of the Tate Gallery, was the prototype for our piece. https://www.tate.org.uk/art/artworks/lichtenstein-whaam-t00897
The left-hand canvas features an American fighter plane firing a missile into the right-hand canvas and hitting an approaching enemy plane; above the American plane, the words of the pilot appear in a yellow bubble: ‘I PRESSED THE FIRE CONTROL… AND AHEAD OF ME ROCKETS BLAZED THROUGH THE SKY…’. The outline of the resulting explosion emanates in yellow, red and white; the work’s onomatopoeic title, ‘WHAAM!’, jags diagonally upwards to the left from the fireball in yellow, as if in visual response to the words of the pilot. The painting is rendered in the formal tradition of machine-printed comic strips – thick black lines enclosing areas of primary colour and lettering, with uniform areas of Ben-Day dots, purple for the shading on the main fighter plane and blue for the background of the sky. 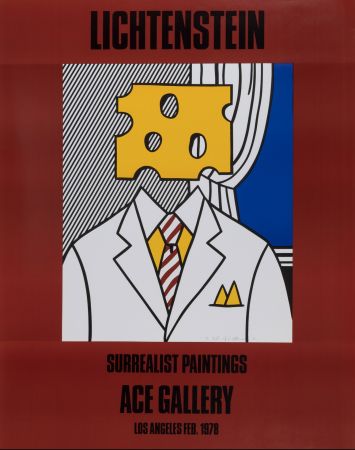